How to Survive Working for a Jerk 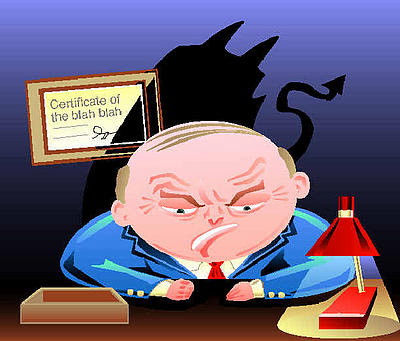 I used to have a boss I detested so much I used to envision her falling down a manhole -- not to kill her, but just injure her enough to put her in the hospital long enough for me to find another job.

After I interviewed Kathi Elster and Katherine Crowley for my Gannett column, I realized I wasn't alone in feeling so desperate when it comes to a bad boss. Here's the column:

There is probably nothing that impacts the quality of a job like a boss. Get a good manager, and you like going to work every day. Have a bad boss, and you don’t even want to get out of bed in the morning.

If you’ve ever had a bad boss, you often dream of how to get out working for a jerk, ranging from winning the lottery to getting a better job somewhere else. But in this job market? You’re feeling a bit desperate.

“People who are employed right now and work for a bad boss know they can’t immediately leave, because they know jobs are hard to come by,” says Kathi Elster, a business strategist and consultant. “It’s frustrating and depressing for them.”

Elster spends a lot of time listening to people gripe about their bosses, along with her partner in K Squared Enterprises in New York, psychotherapist Katherine Crowley. They recently put together some strategies for helping employees “manage their boss” called “Working for You Isn’t Working for Me,” (Portfolio, $25.95).

“The fact is, you need to manage the relationship,” Crowley says. “People often feel they don’t have power, and feel victimized. But you do have power in this relationship.”

Adds Elster: “The key is to manage yourself to minimize your boss’s behavior on you.”

In the book, Elster and Crowley say there are four keys to improving a bad boss relationship:

1. Detect. You first must identify exactly what it is that “drives you bonkers” in a bad boss, such as verbal attacks or unwarranted criticism. “Once you can detect it,” the authors say, “you can correct it.”

2. Detach. By learning to see the boss for who he is, and educating yourself on how not to react so strongly to the annoying behavior, then you’ll be able to eliminate the stress a bad boss brings to all areas of your life.

3. Depersonalize. No matter how miserable a boss may make you, you’re not the first person to go through this and you must realize “it’s not about you,” the authors say. By understanding the boss’s behavior existed long before you arrived on the scene and that one of the reasons it is so upsetting to you is because it’s triggering your “worst fears,” then you can learn to view the behavior more objectively.

4. Deal: This involves creating a customized plan so that “when the boss acts out, you can defend yourself” and take a more objective and constructive approach to your job and career, they say.

Crowley says that the bad economy may be triggering even more bad boss behavior, as the stress only emphasizes poor management skills. In other words, the over-controlling or “checked out” boss may become even more so, increasing worker tension.

The authors note that employees typically will try to cope with bad boss behavior with tactics that don’t work such as: avoiding the boss at all costs; sulking; becoming full of self-doubt; obsessing about how to handle the boss; wishing for the boss’s demise; gloating over the boss’s behavior; bad-mouthing the boss; confronting an annoying manager; retaliating; or giving the boss the silent treatment.

But employees need to understand that unless they take steps to resolve problems with a boss in a more constructive way, they may continue to have problems no matter where they work, Crowley says.

“People tend to attract recurring situations unless they learn to resolve them,” Crowley says. “Sometimes bad boss behavior feels familiar – it’s like you’re drawn to that kind of person.”

Elster notes that employees should also learn to “take back their power” in a difficult situation by taking care of themselves physically. She recommends coping with the stress by exercising, eating right, spending time with supportive family and friends, doing enjoyable activities and learning relaxation breathing for tough times.

How do you deal with a bad boss?

This is timely. I don't have bosses. I have clients. But then clients, even when I screen so carefully, sometimes have agents, or assistants, or partners, who were hiding in the background and come scuttling to the surface after the contract is signed. These are all good tips and I am still learning to "deal." Aren't we all? So thanks. :)

Kathryn,
I think this is probably an ongoing process for all of us. The authors point out it can take about three months to really implement this strategy successfully...!
Thanks for sharing your thoughts.

And always think that it's an opportunity to be challenged. We should see a good future with them and swallow all the pride.

Anonymous,
I agree it's a smart idea to keep your eye on your future and where you want to go. Getting caught up in petty arguments and harboring resentment can just get in the way.

You know this is one of my favorite topics that you write about. The rules you share here could also apply if you manage or supervise such the person you describe. I don't think I have 3 months....

Sandy Said...
Excellent information. I have worked with a BAD BOSS and it was not pleaseant. Seven years of torture.
I dealt with the situation much to your advise and I'll chalk that up to lasting the seven years. Be calm, take a breath and relieve the tension. Believe me it works.