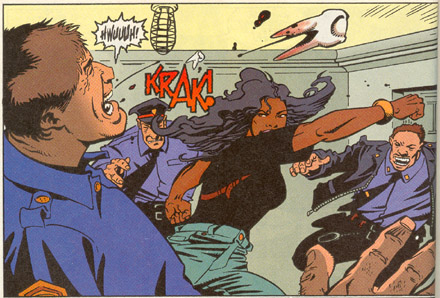 In my family, there's a saying about "two floors later." It has to do with the time a family member had a run-in with another person and couldn't think of a good comeback. Instead, she got on the elevator, fuming.
She says that "two floors later" on the elevator ride she came up with just the right comeback. Now, whenever our family has a difficult conversation and can't think of the right way to respond at that moment, we talk about how "two floors later" we found the right response.
At work, we may not have that long to try and save our reputation. Confronted with a snide comment from a co-worker, or an inappropriate remark from a boss, we wish we had just the right comeback. I did a column for Gannett/USAToday.com that may be just the ticket for those who get tongue-tied....
Sometimes it happens just before you fall asleep.

In a flash of brilliance, the perfect response to the snide comment a co-worker made to you earlier that day finally hits you.

Unfortunately, the comeback wasn't there when you needed it, and now you're tossing and turning in frustration, replaying an upsetting conversation in your head.

Why couldn't you have thought of that great response immediately?

It might be because you didn't ready yourself for such a verbal skirmish on the job — even though most workers experience them daily. And, when you don't hone your communication skills, you can easily become the victim of a verbal smackdown.

For many people, finding the right response at the right time is often difficult, frustrating and stressful.

A colleague's subtle put-down, the boss' accusatory comment — they're all statements for which you wish you had just the right comeback. But Kathleen Kelley Reardon says you can become more powerful in your exchanges at work as long as you're willing to practice for such interactions.

If not, she says you might not only come out on the losing end of a discussion, but your career also could suffer.

"We are at least 75% responsible for the way people treat us. So if you don't respond to someone who goes beyond what you consider your threshold of common decency and respect, then you've said that they can treat you that way again," says Reardon, management professor at the Marshall School of Business at the University of Southern California.

Workers need to be more prepared than ever to deal with verbal jabs from colleagues who may be feeling unsettled and prone to show more aggression in protecting their jobs during a difficult economy, she says.

"I think people are more willing to say things to improve their chances of being noticed at work while decreasing it for others," she says.

At the same time, Reardon says she worries that workers who spend too much time texting or e-mailing as their primary way to communicate are further diminishing their ability to verbally hold their own in various office interactions.

"You have to be able to respond on your feet at work, and I think some people are becoming less adept at it," she says. "They need to use these (verbal) skills regularly in order to become good at it."

The key to learning the right comebacks for the right situation is identifying the kind of verbal interaction that best fits your personality, Reardon says. In her new book with Christopher T. Noblet, Comebacks at Work, (Harper Business, $24.99), some of the suggestions for comebacks include these:

•Reframing. If things are getting heated, you can say something like, "This isn't a fight. It's just a disagreement."

•Rephrasing. If you find yourself offended by another person's statement, you can say, "Another way you could say that without getting my back up is.. ."

•Rebuking. You can chastise someone by saying, "If that was meant to be funny, you missed the mark."

•Requesting. Question the other person by asking, "Can you tell me more about what you just said? I may be misreading something here."

•Revisiting. If you've had earlier success with someone but are now failing in your interaction, try: "We've always worked well together. Let's not change course now."

•Retaliating. This is not for the faint of heart and should be used sparingly. A comeback is used strictly to strike at the other person for a comment. You can say, "Since incivility is your style, I have a few choice words for you as well." Then use them.

Always ask the other person for clarification before assuming the worst about a comment, Reardon says.

"Give the other person a chance to do the right thing," she says. "It's truly a generous thing to give someone an opportunity to hear what they said."

Any other advice for facing down snide comments at work?

If your willing to practice...the famous last words for anything to do with advancing our careers. We should invest time in to practice, but it seems few do.

I once witnessed an exchange, where person A was fast approaching 'the line'. Person B sat back in the chair and said "A, your non-verbals are screaming so loud I cannot hear what you are saying. Let's take a bio break for 10 minutes and pick up when we return." The nearing 'situation' was avoided.