4 Ways to Ramp Down the Conflict at Work 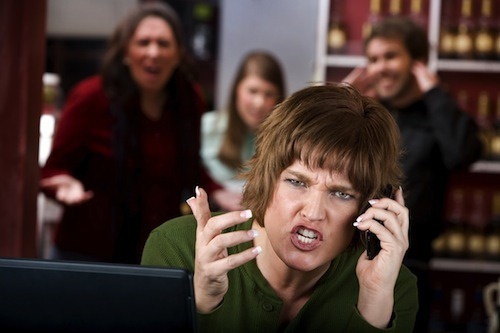 There's the guy who clips his fingernails at his desk. The woman who talks in a "kitty whitty" voice when she asks for a favor. Or the manager who takes his shoes off in a meeting and props his feet on the table.

All people I have worked alongside. All people I wished would be transferred to a faraway rain forest. But then I remember how much I like animals, especially those cute little monkeys, and know I can't inflict these people on any other living being. So, I have to learn to work with them. Here's a story I did for Gannett/USAToday that might help you learn to do the same...

Many people say they love their jobs; it's the people they work with they can't stand.That can prompt some people to seek a job at another company with different people. But that's a strategy that really doesn't work.
For one thing, a poor job market means that job hopping isn't easy. For another, the problem that makes you want to leave in the first place — an inability to get along with some people — is likely to follow you to your next job,Susan H. Shearouse says.
"The reality is that you can learn to deal with the issues in your current job, or you can learn to deal with them in a new one," says Shearouse, who operates Frameworks for Agreement in Vienna, Va.
Many workplace conflicts arise out of fear, she says. Many people fear saying or doing the wrong thing, fear doing less than expected, and fear layoffs or unemployment.
Those anxieties "lead us to do things that are counter-productive, that are destructive," she says. "We tend to overreact to situations at work."
Another issue: While many people spend a long time finding the right partner with whom to spend their lives, workers often have little say-so about choosing co-workers or bosses.
"The problem is that you end up spending more time with the people at work than you do with those you live," she says.
That is a scenario that often leads to conflict. Different personalities, varied work styles and the stresses of a bad economy can cause eruptions that lead to hurt feelings, sniping and an inability to communicate in a way that enables work to get done.
The result: a situation that can not only take a toll on you physically and emotionally but also on your career.
Shearouse, author of Conflict 101, (Amacom, $17.95), says she has several suggestions on how to deal with conflict in the workplace:

• Don't hide behind email. Shearouse says communication is often the biggest source of problems at work, and email doesn't help.

"The less you want to talk to someone, the more you want to use email," she says. "But that only makes you less productive." To keep trust from eroding further, try to have face-to-face communications, which can help better resolve questions and avoid misinterpretations that arise from email.

• Be patient. Resolving a workplace conflict with someone often takes time. It will take time for someone to forgive you for a transgression, and vice versa.

"Sometimes when people don't get an immediate cure, they feel it won't get better," Shearouse says. "But you probably remember a time in your life that something got better over time. Believe in that possibility."

• Let go. Shearouse says it's important to think about what you can learn from a conflict at work.

Do you need to set more boundaries? What should you do to keep such a conflict from arising again?

Learning to let go of grudges and trying to learn from a workplace disagreement can free you from past hurts and help you look for new learning opportunities.

• Keep it in perspective. Learning to sometimes laugh at your mistakes and smile more can create positive energy around you and make you more approachable, Shearouse says.

"Sometimes we could jump up and down and scream, but it really wouldn't help anything," she says. While you want to lighten the mood, don't be flippant, sarcastic or tell off-color jokes, which can offend others and make a bad situation worse.

"The reality is that when you apply for a job, you don't get to interview the people you'll work with," Shearouse says. "So you've got to learn to work with different people. It's going to be that way in any workplace."

What ways have you found to be able to cope with different people at work?

If you manage individuals in conflict make sure the conflict stays strictly between the two combatants. It's natural for each side to look for allies for their point of view. This can create total work-group divisions and cripple your entire operation. Counsel both parties that this sort of "recruitment to their side of the argument" behavior will not be tolerated.