Networking Key for Vets to Find a Job 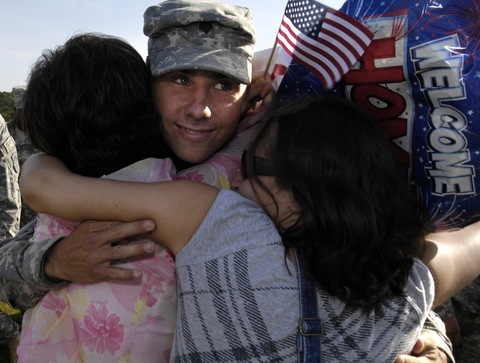 I just have one question for you today: What have you done to help a vet find a job?

Read this story I did for Gannett/USAToday and promise yourself that you'll spend some time this Thanksgiving holiday giving thanks for our military and their families. And then help one of them find a job....

In 2008, when Jessie Canella returned home from Iraq where he had been deployed as a Marine, he wasn't sure how to get a job in the civilian world.

So he turned to what he had heard was a place to find lots of jobs: online job boards.

Canella soon learned what other job seekers have discovered: Competing with thousands of others online is often like throwing a resume into a black hole.

The one person who did contact him about a job was merely a front for a scam, asking Canella to provide cash to get a job. He declined.

Finally, bored and feeling down about his inability to get a job even though he had conducted more than 180 combat missions as a lead gunner and personal body guard to the mission commander in Iraq, Canella took a part-time position as a bartender.

He also decided to get a haircut from a barber he had known for decades. While in the barber's chair, Canella confided that he was depressed about his job prospects. The barber learned that Canella wanted a job in security and mentioned that he cut the hair of another man who owned a security company.

While that contact said he wasn't hiring, he also said he could put Canella in contact with other security companies that might have a position for him.

"I just put my heart on my sleeve and told them I just really wanted a job," Canella says.

He landed a position with a security company that soon had him rising into the supervisory ranks.

Even though Canella finally landed a job, he still felt a need to help his fellow veterans. He found that he couldn't really connect with vets at the local VFW and American Legionhalls because they were from older generations.

When another vet who was a friend committed suicide, he moved into action.

Canella understood that military veterans may have an even more difficult time finding work than he did.

Based on his own job-hunting experience and his desire to find other vets who could understand what he had gone through, he launched HonorVet, to provide resources and support online for veterans and their families.

Canella needed money to make HonorVet a reality, and set up a gala to collect donations and get the ball rolling.

At the event, he met leaders from System One Holdings, a company that provides technical outsourcing solutions. They told him they also wanted to do more to help vets get jobs and soon hired Canella to head their efforts.

Canella, now 25, is general manager at System One and chief executive officer of HonorVet.

He says he has learned a lot about the value of networking through his own experiences in re-entering civilian life, and he and others want to provide such help to vets and their families.

With some 40,000 troops withdrawing from Iraq by the end of the year and veterans' unemployment rate now at 11.7%, he says he knows the need will become greater.

Fundraising events have helped gather more than half the money needed for his HonorVet website, and Canella hopes to have it up by early spring. The site will offer a secure way for vets and their families to communicate about everything from mental-health resources to career mentorship.

Only those who have been thoroughly screened will be allowed to participate, Canella says, so veterans won't have any violation of trust or scams such as the one he experienced.

"When you're in the military and on base, you're surrounded by people you trust," he says. "But it's a real wake-up call when you enter the civilian world. It's like starting all over again. You're trying to figure out who are good people and who are not."

Even though the website isn't yet functioning, Canella says that HonorVet has helped 35 veterans get jobs in the past year.

Once private and public employers are educated about the skills former military personnel can bring to the workplace Canella believes everyone will know what extraordinary employees America's veterans can be.

What should vets be doing to help break into the job market?

Monster and Military.com are providing a fantastic opportunity for vets to jump-start their career this week, at the Veterans Virtual Job Fair (http://www.veteransvirtualcareerfair.com/web/), which is running through November 18. It includes more than 30 national employers, including Monster customers Lowe's, DHL, PG&E, Verizon, USAA and many more -- all of whom have positions to fill now and want to fill them with heroes. It's free for vets -- all it requires is an Internet connection.

Your broader question is harder to answer, because each veteran is different -- bringing different skills, experience, and career aspirations to his or her job search. That's one reason Monster, along with its Military.com partner, has a library of online advice for vets -- with tips and information on everything from drafting a resume to networking. Check it out: http://www.military.com/veteran-jobs/career-advice

You're right that, in the modern job search, it's all about "who you know" -- networking is key. So don't miss out on the networking opportunities provided by Military.com's Veteran Career Network (the Web's largest career network for vets: http://benefits.military.com/vcn/search.do).

Thanks, Charles, for providing such a wonderful resource for vets!