How to Stop Hating Your Team 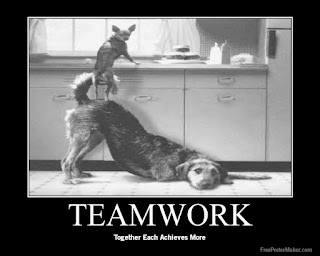 Hate working in teams? Sometimes, I do too. I don't have time to deal with the drama queen, the negative Ned and the overzealous employee who thinks he is the next Donald Trump.
That's why I was a bit reassured to know I'm not alone, and there is hope. Teams don't have to be about as fun as a toenail fungus, if I just change my attitude and those in charge do a better job putting teams into motion.
Read how in this latest story I did for Gannett/USA Today....

If you think workplace teams are a great idea but would be thrilled if you weren't on one again in your lifetime, you're not alone.
According to a new University of Phoenix survey, 95% of respondents say teams serve an important purpose, but only 24% prefer to work that way. Younger workers like it even less. Many say they would rather work alone.


"I think the fact that less than a quarter of workers would prefer to work on teams is a pretty shocking statistic although it doesn't surprise me personally, says Barry Feierstein, chief business operating officer of University of Phoenix. "Teams are hard."
Different generations, different agendas and different personality types thrown together creates tension, Feierstein says.


Another problem: Team members may resent being put on teams that add to their workload or force them to work closely with people they would rather avoid. Add in the various authority levels of different team members and "you've got a dance you have to make figure out work," he says.
The survey also finds some of the other reasons that contribute to the negative feelings about teams:
Feierstein says he has never been on a team where a confrontation turned physical although he's seen "staplers and books sent flying through the air," so it could be respondents were judging such interactions as physical.
The University of Phoenix integrates teamwork and collaboration into its curriculum because officials there believe those skills need to be developed before students enter the workplace, he says.
This may be a more important skill than ever because the students have grown up communicating with technology, one-on-one cellphone texting, online with Facebook friends or tweets to the world. In other words, students may have more difficulty working face to face on teams, he says.
"It used to be that you interfaced with friends on the phone or by meeting them face to face," he says. "You learned to listen to the tone and have empathy for what they were saying. But now, because of technology, collaboration has become more sterile. Personalities are not able to come across and you can't pick up on nonverbal body language."
That's why Feierstein says the survey should be used as a call to action.


"For me personally, it will make me more aware that when I'm on a team most of the other people in the room don't want to be there," he says. "That's something as a leader I need to acknowledge and deal with."
Team members need to know that the leaders understand their lack of excitement, "but that we will win or die as a team."
Anyone who continues to express negativity should be reminded that such bad attitudes won't be tolerated, he says.
"I think you've got to be honest with people that you know they may have had bad experiences in the past because that will help take away some of the anxiety," Feierstein says. "You've got to approach this situation so that you can help the team develop a way to trust one another."
Team members can help make the experience more pleasant.
"If I were a more junior member, I would view it as a chance to build awareness of myself, as a way to build my network and to show other people my skill set," he says. "You can learn a lot if you go into it with a positive attitude ... that will help you be more effective."