Use Social Pressure to Get a Slacker Colleague Back on Track 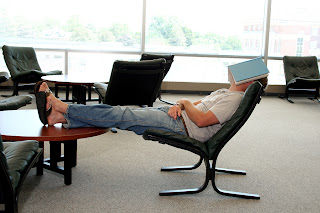 I haven't posted on this blog in a while because I was taking some time off. I wasn't just slacking, I swear!  I was busy eating my way through New York City and visiting the M&M store on multiple occasions. You'll understand why I don't want you to think I was just being a typical slacker after you read this column I did for Gannett/USA Today.....

If you worked an additional four to six hours last week because a slacking colleague didn’t pull his weight, you’re not alone.
According to a new VitalSmarts study, slacking colleagues cause a quarter of workers to put in more time each week, and 4 of 5 employees report their work quality declines when they have to cover for a co-worker.


But before you heap scorn upon your boss for not dealing with a lazy colleague, you need to be aware that the problem isn’t necessarily the boss’s fault, says Joseph Grenny, cofounder of VitalSmarts corporate training.
He explains that bosses today often aren’t working physically alongside a team, so they may be unaware that someone is goofing off. The problem becomes worse when a productive worker doesn’t see the boss reprimanding a slacker colleague, so the hard-working employee may believe he also should keep his mouth shut.
The result of that silence about slacking "means nobody is being responsible, and over time it becomes collusion," Grenny says. "It becomes OK for the person to be a slacker."
But the long-term problem is that others begin to resent the slacking co-worker, and the slacker’s subpar performance begins to affect productivity and the bottom line. Still, no one says anything because the workers believe they are powerless to change the situation.
That’s the wrong assumption to make, Grenny says.
"People tend to believe that it’s power that can change a situation," he says. "But all it takes is social pressure. It can be enormously potent."
That’s why Grenny, a co-author of Crucial Conversations, encourages others not to put up with slacking colleagues but instead have a conversation about the issues.
"Our brains are geared to immediately latch onto threats and risks, so we may only focus on the bad things that can happen with such a conversation. But we need to think about what will happen if we don’t say anything," he says. "We will become an enabler of this person, or we’ll continue to be overworked."

Grenny offers several solutions for having a talk with a slacker:
Don’t be judgmental » "This person you consider a slacker may not even be aware of what is going on, so don’t assume the worst," he says.
When you’re angry about what you consider a colleague’s lazy work ethic, what you’re really mad about is not dealing with the situation, he says.
"You must approach the person with respect," Grenny says. "If you assume they’re going to care, the majority of the time they will."
Own up to the problem » Don’t try to push this off on your boss. Feedback needs to come from who is most affected by it: you.
"If you decide that you would rather do the work yourself and feel happy about it, then that’s mature," Grenny says. "But if you’re going to resent it, then you’re not taking ownership of your own decision."
Be factual » Don’t get hostile or use an accusatory tone.
Instead, tell the colleague your concerns and help him see the consequences of his actions. Be open to the co-worker’s response.
"People only get defensive in these situations not because of what you say but because of why they think you’re saying it," Grenny says. "They think you don’t care about them or are trying to attack them. By providing some reassurance, you restore their sense of safety."
Many times slackers are people the boss doesn’t want touching important projects or taking on critical tasks, says Andy Robinson, an executive coach with CRG Leadership Institute.


"Leaders tend to give the best projects to the person who always rises to the occasion," he says. "These are the people who have consistently demonstrated that they will get the job done, so as a consequence the boss continues to feed them more stuff."
Still, Robinson says most good leaders don’t want to burn out their talented workers and drive them away. So they would be open to hearing if workers are feeling overburdened.


While slackers are in every workplace, consider yourself someone the boss trusts and depends on if you’re given more work, he says.
As for slackers?
"The boss still needs them to get some stuff done," Robinson says. "But they’re going to get the really un-sexy stuff you don’t want."
Posted by Anita at 9:57 AM